Exciting meetings with a urologist!

Exciting to meet a urologist at a urology conference last month. He is Senior Consultant Urologist of St Bartholomew’s Health Trust and responsible for hospitals in that Trust area of East London and the City of London. Professor Frank CHINEGWUNDOH has two lines of letters after his name and also received the MBE from the Queen last year. He is a charming, friendly and willing learner  about patients’ prevention and self-help of UTI’s. Medical students are not taught this. They are taught to write prescriptions for antibiotics and to do the usual basic array of investigative operations. Prevention is not in the mainstream medical syllabus for urology. 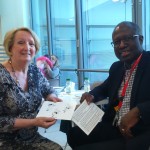 Professor Frank as I now call him, is very keen to listen and learn because he knows that what his profession offers for UTI patients isn’t very satisfactory. There is a 4-6 months waiting time for patients to get appointments in many urology clinics and there is a shortage of urologists as well. Not good. Patients must help.

I began my work in St Bartholomew’s Hospital urology unit some 45 years ago with Mr John Wickham who oversaw the first editions of the famous U&I Club. This was a registered charity that I founded  offering magazines for patients to exchange useful help in fighting UTI’s. It quickly rose to ten thousand members in 46 countries.

Increasing numbers found me writing my first book on cystitis in 1972. Called ‘Understanding Cystitis’ it then only had one chapter on generalised self help. Even so it helped many women to know that they could do things to help themselves but it now out of print and overtaken by more research. 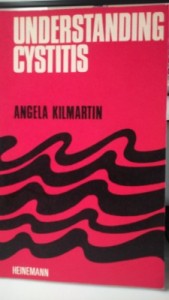 After many years and many books and many leaflets the current ‘Bible’, as the web recognises my 12th book, is a marvel of self- help and ideas and knowledge. The Patient’s Encyclopaedia of Urinary Tract Infection, Sexual Cystitis and Interstitial Cystitis is the best there is and packed with information. There is no need to suffer from UTI’s these-days. It is online as an e-book in four languages, Russian, English, Spanish, Chinese. I have six booklets all to be seen via my webpage in the Suppliers section. There is a half hour DVD for USA and UK showing the Bottle Washing and the major routes of self-help.

Myself and Professor Frank have cooperated on a departmental two-sided leaflet. It was printed last week and is very plain, simple to read and understand. It is primarily aimed at doctors; frontline family doctors and hospital doctors to give to patients with repeat UTI’s. It is starting out in English but probably will run to translations. He has taken enough copies to introduce to his team and I shall go along for more explanations at their weekly meeting. I will demonstrate the Bottle Washing, too, so they all know how to stop bowel germs travelling forwards. This is by far the main way to stop UTI’s.

Our two heads are brimming with new ideas and this week I have devised a questionnaire for patients to fill out in the waiting room. Answers will assist the doctors to pinpoint one or more causes for any particular woman’s urinary tract infections.

There will be more innovations as time goes by but large trees from little acorns grow!